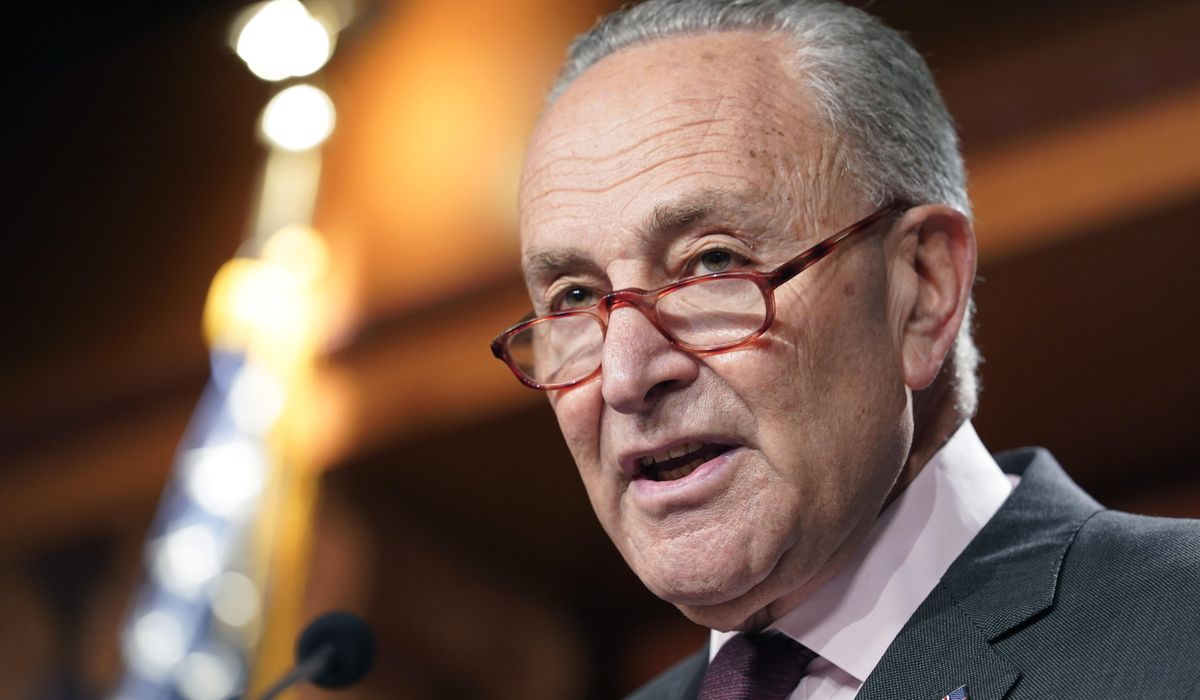 Senate Democrats have cleared a key procedural hurdle on the path toward passing their $740 billion health care, climate, tax and spending package, setting up a significant win for the party after months of tense back-and-forth over the cornerstone bill in President Biden’s long-stalled legislative agenda.

Vice President Kamala Harris delivered the tie-breaking vote Saturday evening on a motion to proceed to final debate on the so-called Inflation Reduction Act after the evenly split chamber voted along party lines on the measure in a rare weekend session as Democrats race to move the bill across the finish line before departing for the Senate’s August recess.

“It’s time to move this nation forward,” Senate Majority Leader Charles E. Schumer, New York Democrat, said on the Senate floor ahead of the vote. “Senate Democrats began this majority by promising to tackle the biggest challenges facing our country. The Inflation Reduction Act will make good on that promise and serve as the capstone to one of the most productive stretches the Senate has seen in a very long time.”

“In the end, it will be the American people who benefit from the work we do here and now,” he said.

Senate Democrats received the green light to advance the bill late Thursday when the final holdout in the caucus, Arizona Sen. Kyrsten Sinema, signaled that she was ready to “move forward” on the legislation contingent on changing tax provisions contained in the bill which targeted wealthy investors and large corporations.

Ms. MacDonough ruled early Saturday morning that Democrats would have to remove a measure from the legislation that would have forced drugmakers to pay rebates for products they sell to private insurers if their prices exceed inflation.

Drug manufacturers would still have to pay penalties for those drugs bought by Medicare.

“Now that our meetings with the parliamentarian have largely concluded, we have a bill before us that can win the support of all 50 Democrats,” he said. “The bill when passed will meet all of our goals, fighting climate change, lowering health care costs, closing tax loopholes abused by the wealthy, and reducing the deficit.”

Under Senate rules governing the reconciliation process, Mr. Schumer needs to secure a simple majority in the evenly split chamber rather than meet the normal 60-vote threshold.

The White House urged lawmakers to move forward on what they said would be a “critical victory for American workers and families, as well as the U.S. economy,” in a statement ahead of the vote.

“This historic legislation would help tackle today’s most pressing economic challenges, make our economy stronger for decades to come, and position the United States to be the world’s leader in clean energy,” the White House said.

The Saturday evening vote to begin the final debate on the bill kicked off what is expected to be a slog before the legislation crosses the final finish line.

Critics say the Democrats’ bill does little to fight inflation and introduces job-killing climate provisions and tax hikes that will stymie economic growth.

Republicans plan to put up a tough fight against the bill through what’s known as a “vote-a-rama” — an hours-long process that forces the full chamber to consider changes to the budget legislation. Part of the strategy is to put Democrats on the defensive on a range of hot-button topics.

At the end of the votes on amendments, which could start as early as this weekend, the majority party passes a final amendment negating any previous one that was passed.

Senate Republicans have pledged to make the process as tough as possible in an unlikely, last-ditch bid to pressure enough of their Democratic colleagues to abandon the bill.

“It will be like hell,” Sen. Lindsey Graham, South Carolina Republican, told reporters Friday. “They deserve this.”

“They are empowering legislation that will make the average person’s life more difficult,” he said. “I am hoping we can come up with proposals that will make sense to a few of them and they will abandon this jihad they are on to tax and spend.”

Mr. Graham was joined by several GOP colleagues in ripping into the bill ahead of a series of votes expected over the weekend.

Senate Minority Whip John Thune of South Dakota said the bill will “have no discernible beneficial impact on inflation,” a point the Democrats dispute.

“This is a big tax increase on job creators in this country that won’t do anything to address the inflation crisis in this country and the economic recession that we’re already in,” Mr. Thune said. “The American people deserve better. We’re going to do everything we can to defeat this bill.”

The post Senate Democrats clear procedural hurdle on marque tax and spending bill was first published by The Washington Times and is reprinted here with permission. Please support their efforts.